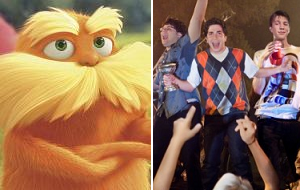 Dr. Seuss' The Lorax will have no problem claiming the top spot at the box office this coming weekend.

Now that Journey 2: The Mysterious Island is subsiding, the market is wide open for a family-friendly flick like The Lorax. The Dr. Seuss name also comes with plenty of built-in trust even though some adaptations of his work—here's looking at you, The Cat in the Hat—left a bitter taste. Universal is marketing the animated flick very aggressively, and it should pay off.

As of 4 p.m. PT, Fandango reports that The Lorax is responsible for 29% of daily sales.

Look for The Lorax to do $44 million from around 3,600 locations during its debut frame.

With Project X, producer Todd Phillips takes the found-footage genre away from its sci-fi/horror leanings. Coming off the success of The Devil Inside and Chronicle, Project X looks likes a safe bet for Warner Brothers. Phillips has earned an immense amount of mainstream trust thanks to his Hangover films, and his name will help make up for a cast populated by unknowns.

As of 4 p.m. PT, Fandango reports that Project X accounts for 4% of daily sales.

Expect Project X to rake in $20 million from around 3,000 locations.