Weekend Predictions: 'The Possession,' 'Lawless' and 'The Oogieloves in The BIG Balloon Adventure' 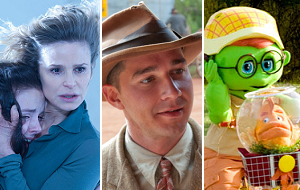 A possessed teenager looks poised to rule the box office over an extended holiday weekend.

Now that The Apparition has landed with a resounding thud, the horror market is wide open for a movie like The Possession. Horror junkies have been undeserved this summer, so they are bound to show support.

Look for The Possession to grab $14 million from around 2,700 locations over the four-day frame.

Lawless boasts a star-studded cast, but the fact that it's a period piece being released in the summer limits its potential. Still, the Prohibition Era flick is doing quite well on Facebook and Twitter. Expectations are mildly optimistic.

Lawless should take in $15 million from Wednesday-Monday at 2,565 locations, $13 million of which will come from Friday-Monday.

Keep a very close eye on 2016: Obama's America this weekend. The anti-Obama doc is catching on quickly in conservative circles. Energy drummed up by the Republican convention this week will only fuel ticket sales. Rocky Mountain Pictures is expanding 2016 to more than 1,700 locations.

The Oogieloves in the BIG Balloon Adventure has been given a strong marketing push, but families aren't showing a lot of interest. After Madagascar 3, Brave and others, families have already been to the movies quite a bit this summer. The next big family-friendly hit will be Finding Nemo 3D in the middle of September.

Expect Oogieloves to take in $3.5 million from Wednesday-Monday at 2,160 locations, $3.2 million of which will come from Friday-Monday.

Tags: The Possession, Lawless, The Oogielove and the BIG Balloon Adventure, 2016: Obama's America