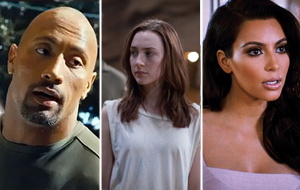 Three films have been added to our Long Range Forecast this weekend: G.I. Joe: Retaliation, The Host and Tyler Perry's Temptation. All three films are scheduled to debut on Friday, March 29.

- The added presence of Dwayne "The Rock" Johnson (who will be attracting extra attention at the time for his WrestleMania appearance) and Bruce Willis within the cast.
- Channing Tatum is a bigger draw now than he was for the first film back in 2009.
- The shift in tone from the first film might attract older action fans and widen the demographic appeal.
- Will have a 3D boost that G.I. Joe: The Rise of Cobra didn't have.

- Easter isn't the easiest weekend to open a film (only two films have ever opened with more than $40 million on Easter weekend) and competition will be especially fierce this Easter.
- The last-minute delay of the film by nearly a year may have dampened the previous enthusiasm levels that existed last year.
- While not universally hated, the first film isn't something that most have clamored for a sequel to.
- The extent of Channing Tatum's role in this sequel still seems to be up in the air.

- Adaptations of young-adult fiction remain safe bets at the box office.
- Stephanie Meyer's Twilight follow-up is sure to draw media attention, though whether or not her name draws in Twilight fans to a non-Twilight film remains to be seen.
- Saoirse Ronan already has a following after her performances in Atonement, The Lovely Bones and Hanna.

- As mentioned, opening on Easter weekend isn't easy and this year will be especially crowded.
- Based on anticipation levels so far, the film is more likely to perform in line with adaptations such as Eragon and I Am Number Four rather than having a break-out performance.
- While he has a following, Andrew Niccol's previous films as a director haven't performed all that well at the box office.

- Based on a pre-existing Tyler Perry play, which typically transfers into a stronger box office performance when it comes to Perry's films.
- Three previous Tyler Perry films have debuted on Easter weekend (Why Did I Get Married Too?, Madea's Big Happy Family and Meet the Browns), with opening weekend grosses for those three all falling within the $20 million to $30 million range.

- Both of Perry's non-Madea 2012 projects, Good Deeds and Alex Cross, failed to live up to box office expectations.
- Potential could be limited a bit from opening the same weekend as G.I. Joe: Retaliation.

Notable changes on our forecast this week include Identity Thief and Side Effects.