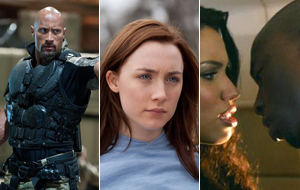 Easter weekend is ahead and studios are bringing out some bigger guns in an effort to drive big holiday business. Paramount's G.I. Joe: Retaliation gets things started with an early debut on Thursday, March 28. The Host and Temptation follow on Friday.

Overall, we expect family films to hold up particularly well this weekend as Sunday business will be inflated with the holiday. Non-family films, however, could suffer slightly with college basketball's March Madness in full force through Sunday.

- Brand name recognition.
- Dwayne Johnson has become an increasingly reliable box office star thanks to hits like Fast Five and Journey 2.
- Channing Tatum's presence in the film could entice his female audience to come out.
- Opening on Easter weekend should help the film to capitalize on the movie's potential appeal to families (young boys, specifically).
- Flixster user anticipation is fairly strong.

- The 2009 film, The Rise of Cobra, did well in its time but isn't remembered particularly well almost four years later.
- Action fans could easily forego Joe in lieu of last weekend's breakout, Olympus Has Fallen.
- Twitter activity has paled in comparison to The Expendables 2.

- The book's young adult fan base will probably turn out.
- Advertised as "from Stephanie Meyer, creator of Twilight" could help bring out some Twilight fans in addition.

- The Twilight films appealed to a very focused female audience the size of which won't carry over to The Host.
- Social network buzz has been lukewarm.

- Tyler Perry's established fan base.
- Previous Perry films have excelled during this time of year, particularly around Easter.

Check out our 3-day predictions for these films and the remainder of the weekend's top 10 in the table below.