Long Range Forecast: 'Man of Steel' & 'This Is the End' 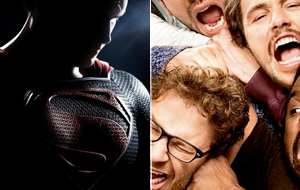 The highly anticipated Man of Steel reboot and ensemble comedy This Is the End have been added to our Long Range Forecast this weekend. Both are currently scheduled to open on Friday, June 14.

- The film's early social network tracking has been very encouraging.
- Fan buzz has been incredibly high thanks in large part to Christopher Nolan's producing credit.
- Reboots have proven successful over the last few years, from Batman Begins to Casino Royale, Star Trek, and The Amazing Spider-Man.
- 2006's Superman Returns pulled over $200 million domestically. It's not hard to imagine a significant jump from that here with the increased buzz around Man of Steel, plus inflation and 3D+IMAX premium prices.
- The new trailer received a strong reaction at CinemaCon.

- The Superman brand hasn't been strong for among general audiences for several decades. Residual elements of over-saturation could still be a factor.
- Director Zack Snyder has had a rougher box office showing lately with films like Sucker Punch and The Legend of the Guardians.
- While The Amazing Spider-Man was successful, it still dropped off significantly from its predecessor--although its predecessor was in a different situation than Superman Returns. Either way, it may take one well-received film before general audiences embrace a new Superman franchise enough to send it to big blockbuster levels.
- The competition in June is fairly stiff with titles like World War Z and Monsters University opening in Man of Steel's second weekend.

This Is the End

- The high concept of the Apatow crew portraying themselves in an end-of-the-world comedy is catching a lot of attention from fans who have left some of their movies behind in recent years.
- Social network buzz has been strong thus far.
- Recently debuted footage out of CinemaCon went over very well.

- Opening immediately after The Hangover Part III and The Internship could soften upfront demand. Opening against Man of Steel won't do it any favors either.
- Female interest in the movie is highly questionable, especially with The Heat debuting two weeks later.
- As noted, the Apatow crew movies have dropped off somewhat from the box office heights of Knocked Up and Superbad. Could this be a return to similar numbers with its original concept?

Notable changes on our forecast this week include Pain & Gain, The Big Wedding, The Great Gatsby, Fast & Furious 6, The Hangover Part III, Now You See Me, The Purge, After Earth, and The Internship.

Tags: Man of Steel, This is the End