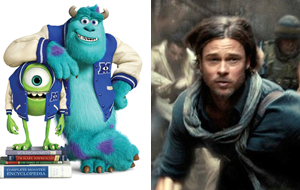 This week, Pixar's Monsters University and Brad Pitt's World War Z have been added to our Long Range Forecast. Both are currently slated to open on Friday, June 21.

- Monsters, Inc. was a big hit back in 2001, when it grossed $255.87 million in its initial run (without adjusting for ticket price inflation).
- The film will have the added benefit of higher priced 3D admissions this time around.
- Pixar films have been consistently strong performers at the box office for years.
- After a relatively soft showing with Cars 2, Pixar rebounded last year with the performance of Brave.
- The limited number of family films during the first part of 2013 should help increase demand.
- Buzz out of the film's CinemaCon screening was solid.

- Twelve years is a very long time to wait in between films.
- Monsters, Inc. 3D didn't light the box office on fire this past winter.
- While Pixar hit it out of the park with Toy Story 3 in 2010, Cars 2 under-performed in 2011.
- The character of Boo (who isn't in the prequel) was a key component to the success of the original film.
- Could be more front-loaded than usual for a Pixar film, as a result of being a prequel and from opening just 12 days before the release of Universal's highly anticipated Despicable Me 2.

- Brad Pitt typically delivers at the box office in high profile roles.
- There is a history of live-action alternatives being able to co-exist with high profile computer animated films in the summer (i.e., 2008's Wanted, 2011's Bad Teacher and last year's Prometheus).
- Being adapted from a pre-existing novel should help.
- With the zombie genre currently at a new zenith in entertainment, could this be for Pitt what I Am Legend and vampires were for Will Smith in 2007?

- Opening the week after Man of Steel could seriously limit potential, especially since the summer marketplace typically expands less in June than it does in July.
- Is likely to take a big hit from the one-two punch of The Heat and White House Down in its second weekend of release and as an action horror film is likely be front-loaded to begin with.
- Release delays may indicate some wavering confidence in its potential.
- The film has already been the target of some negative online buzz, including very modest Super Bowl spot reception.

Notable changes on our forecast this week include Iron Man 3 and Star Trek Into Darkness.