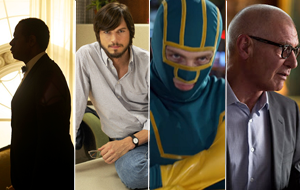 - The first film grew something of a cult following with strong success among fans and critics.
- Twitter and Facebook activity have been strong throughout the week.
- The presence of Jim Carrey and a larger ensemble cast could help bring in a few more of the uninitiated.

- Despite generating very positive word of mouth, the first film's legs at the box office weren't particularly impressive after its subdued opening.
- The string of films opening to modest and/or flat out disappointing numbers over the past month and a half could continue with a sequel that boasts limited appeal.
- Carrey's box office drawing power isn't near what it used to be. Could his political statements over the last few months have a negative impact here?

- The film is timely following the death of Steve Jobs less than two years ago.
- Social network tracking has been fairly solid in comparison to The Social Network.

- Ashton Kutcher isn't a guaranteed box office draw.
- The film could be overlooked in a crowded late summer market.

- After a summer filled with action films, older crowds may be ready for a more cerebral drama such as this.
- The media drama surrounding the movie's title offered free publicity for an otherwise low-key flick.
- The large ensemble cast.
- Previous history of similar films succeeding, such as this year's 42 and August 2011's The Help.
- Positive reviews could continue to increase awareness and interest.

- As a Weinstein Company release with a modest theater count, long legs are more likely to occur than a breakout opening.
- Social network metrics leave a bit to be desired, although that may simply be a byproduct of the film's lack of appeal to young audiences.

- The star-studded cast featuring Harrison Ford, Gary Oldman, and Liam Hemsworth.
- Could benefit among older crowds who pass on The Butler.

- The Hunger Games notwithstanding, Liam Hemsworth hasn't had quite the same rise in potential box office familiarity as his brother, Chris.
- The overcrowded marketplace may leave the film without an audience to corner.
- Middling-to-poor social network tracking, particularly on Flixster.

Check out our forecast for these openers and the remainder of the weekend's top 10 in the table below.