Long Range Forecast: 'The Hobbit: The Desolation of Smaug' & 'A Madea Christmas' 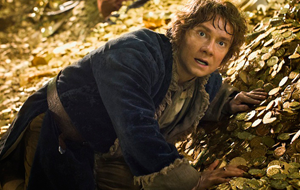 December 13 will see the release of Peter Jackson's The Hobbit: The Desolation of Smaug, as well as Tyler Perry's A Madea Christmas. Check out our initial forecasts below.

- Jackson's Middle-earth film adaptations continue to be popular with family audiences and many fans.
- Opening several weeks after Catching Fire and a month after Thor: The Dark World gives it enough room to play as December's primary tentpole release.
- Early trailer reactions have been more positive than those of An Unexpected Journey, thanks in part to the promise of Benedict Cumberbatch's Smaug, the expanded cast (including the return of Orlando Bloom), and a more action-driven plot.
- Social network activity is very encouraging, particularly across Flixster (where the film boasts a 99 percent anticipation score) and Facebook.
- Expectations will be lowered without the significant hype that preceded the previous film.

- An Unexpected Journey was met with lukewarm reactions from critics and some fans, meaning lowered upfront demand is somewhat likely.
- Matching the performance of the previous entry will be difficult without the decade-long build-up of anticipation.
- Thor: The Dark World and/or Catching Fire may steal some of the film's thunder as the holiday season's biggest attraction(s).
- Will fans and adult audiences who turned away from the previous film come back for a second chance at the new trilogy?

- Perry's Madea character has proven to retain popularity over his films that don't feature "her".
- The Christmas release could be lucrative given the lack of films targeting urban audiences.
- Mainstream Christmas-centric films in general tend to perform respectably, at least, around the holidays.

- Perry's recent films haven't found quite the same box office success they enjoyed several years ago.
- Are audiences getting burnt out on Madea yet?

Notable changes on our forecast this week include Jackass: Bad Grandpa (down), The Counselor (down) and we have removed The Wolf of Wall Street from the list.