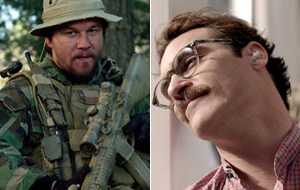 Expanding to wide release on January 10 are Lone Survivor and Her.

- The ensemble cast led by Mark Wahlberg could be very attractive for audiences early in the year.
- Awards buzz may propel the film if its limited December debut goes over well.
- Fans of Act of Valor could turn out for this one as well.
- Wahlberg previously sent Contraband to success on the same weekend in 2012.

- Following a busy holiday season, it will be challenging to draw a large audience upfront.
- Are moviegoers ready for another true story military drama just one year after Zero Dark Thirty?

- The somewhat esoteric premise could be off-putting for mainstream crowds.
- Jonze hasn't churned out many box office hits outside of Where the Wild Things Are.
- Despite awards recognition and a strong following, Eternal Sunshine of the Spotless Mind didn't gain a lot of box office traction with its similar hybrid of high-concept romance and sci-fi.