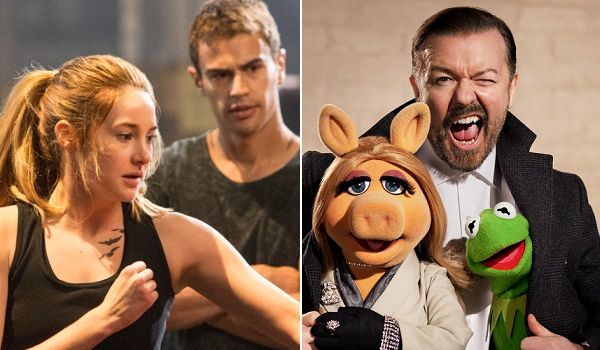 - The adaptation's book sales have been stronger than most young adult book-to-film conversions.
- Following the success of Harry Potter, Twilight, and The Hunger Games, teen audiences are looking for this kind of movie right now.
- Pre-sales have been consistently strong for the past few weeks.
- Online tracking has been strong across Twitter and Facebook.

- Although popular, the Divergent series isn't considered as widely appealing as The Hunger Games. Adult audiences may not go in for this one.
- Aside from Potter, Twilight, and Hunger, most young adult adaptations have failed to generate much traction at the box office.
- Flixster activity has left something to be desired.

- The cast of well-known names and faces could again aid this sequel's nostalgic appeal to older audiences.
- Flixster and Facebook activity have been respectable.
- Online ticketing sites report strong pre-sales for the sequel.

- 2011's revival of The Muppets was a hit, but fell short of many expectations and didn't have a particularly leggy run for a family movie playing during the holidays.
- The recent breakout status of The LEGO Movie and Mr. Peabody & Sherman's current word of mouth could hinder demand for yet another kid-centric flick.