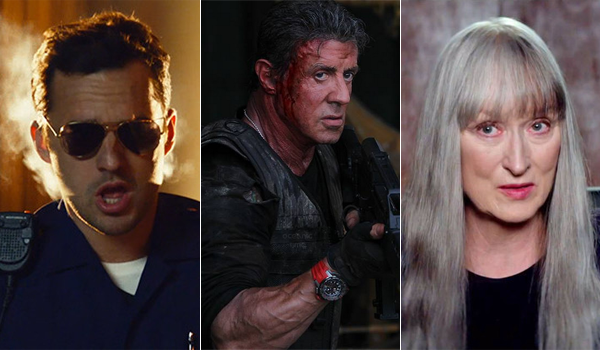 Following Let's Be Cops' Wednesday debut, The Expendables 3 and The Giver get in on the action starting Friday.

- R-rated comedies are hot at the box office in recent years, and Fox's marketing campaign has played up all the right notes.
- Stars Damon Wayans, Jr. and Jake Johnson are due for star-making roles following turns in previous comedy hits in film and television.
- Twitter and Flixster activity have been generally encouraging of late, topping Neighbors on both fronts.

- Has it been enough time since 22 Jump Street for audiences to jump into another buddy "cop" comedy?
- Following the breakout success of Guardians and Turtles, there's only so much young adult audience to go around.
- Facebook buzz has been almost non-existent.

- The piracy leak three weeks ago could have a noticeable effect on the film's performance. This is something a testbed film in regards to that issue.
- Twitter activity has trailed that of Hercules, a discouraging sign for a sequel versus a non-sequel.
- Three-quels tend to dip from their predecessors to begin with unless something fresh is brought to the table.

- The original 1993 novel was, and remains, acclaimed and quite popular.
- A relatively star-studded cast led by Meryl Streep and Jeff Bridges.
- It wouldn't be unheard of for this to benefit in ticket sales for underage teens sneaking into Let's Be Cops.

- As a Weinstein Co. release, awareness and marketing have left something to be desired compared to major studio releases.
- The young adult craze doesn't benefit everything (see The Host, The Mortal Instruments, etc.)
- A crowded market will further hold back breakout potential.

Tags: Let's Be Cops, The Giver, The Expendables 3, predictions