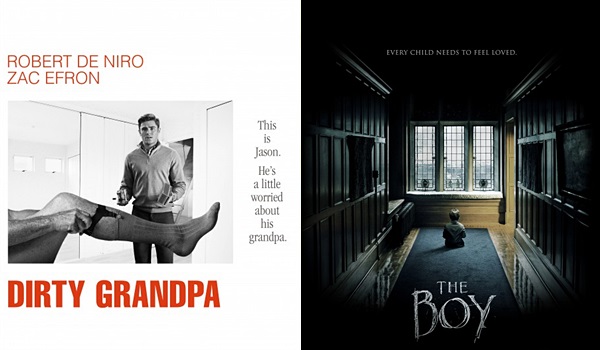 Lionsgate's Dirty Grandpa and STX Entertainment's The Boy will both go into wide release on January 22.

In teaming together Robert De Niro and Zac Efron, Dirty Grandpa will attempt to appeal to both older and younger adults. However, BoxOffice currently doesn't see the film being as strong as recent De Niro comedies such as The Intern and Last Vegas.

While it isn't expected to outpace Dirty Grandpa, The Boy looks to be in store for a solid performance. STX Entertainment will hope to see the film serve as a rebound from the current lackluster performance of its Secret in Their Eyes.

We have also given a boost this week to our forecast for Disney's Star Wars: The Force Awakens. BoxOffice feels increasingly confident that Star Wars: The Force Awakens will set a new all-time opening weekend record, thanks in part to the film's continued amazing online pre-sales and online activity figures, in addition to the film's strong initial traditional pre-release tracking.

- Robert De Niro has had recent success with comedies Last Vegas and The Intern. In addition to their performances, both films went over very well with audiences.

- Dirty Grandpa seems like a film that will appeal to Zac Efron's fanbase.

- Early Twitter activity for the film has been very solid, though online activity tends to be inflated for Efron's films.

- It is possible that in trying to appeal towards both De Niro fans and Efron fans, the film could also turn off fans of both actors in the process; likely more so De Niro's fans than Efron's.

- Zac Efron has an up (Neighbors, The Lucky One & 17 Again) and down (We Are Your Friends, That Awkward Moment & Charlie St. Cloud) track record at the box office.

- The film seems better suited for Spring Break or the summer months as opposed to a late January release.

- The film's concept and PG-13 rating will both help it appeal towards younger horror fans.

- There is a long history of horror films outpacing expectations during the month of January.

- The film could come across as feeling too similar to last year's Annabelle.

- Demand could be limited a bit by arriving just two weeks after fellow PG-13 horror film The Forest.  There is also likely to be some overlap between the potential audiences for The Boy and Dirty Grandpa.