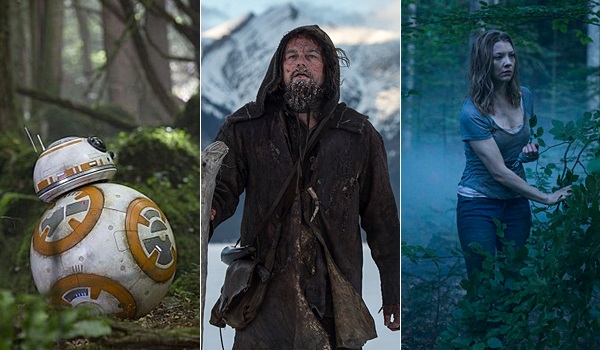 Disney's Star Wars: The Force Awakens is set to easily lead the box office for a fourth consecutive weekend. As of today (Wednesday), the seventh chapter of the Star Wars franchise will have already passed Avatar to become the highest grossing film of all-time domestically without adjusting for ticket price inflation. With The Force Awakens having grossed so much in such a short amount of time and the holidays now behind us, it isn't a given that the film will be able to stabilize enough this weekend to claim the all-time fourth weekend record. It should be very close, but BoxOffice feels The Force Awakens will fall just short of matching the $50.31 million all-time fourth weekend record set by Avatar during the second weekend of January back in 2010. In the bigger picture, Star Wars: The Force Awakens will zoom past the $800 million mark this weekend.

After a strong two-week performance in platform release Fox's The Revenant will expand into wide release this weekend. The Alejandro Gonzalez Iñárritu directed western starring Leonardo DiCaprio will look to fare better in its expansion than fellow western The Hateful Eight did last weekend. BoxOffice sees The Revenant having a significantly stronger expansion than that of The Hateful Eight, thanks in part to stronger awards season buzz, the presence of DiCaprio, a larger location count and not having its weekend performance deflated by a Wednesday expansion.

Also going into wide release this weekend is Focus' The Forest. The PG-13 horror film starring Natalie Dormer will try to follow in the footsteps of the many successful January horror films that have come before it through the years.

- To date The Revenant has grossed a very impressive $1.44 million through 13 days of platform release from 4 locations in New York and Los Angeles. That is on par with the $1.44 million 13-day platform take of 2012's Zero Dark Thirty (which was playing in 5 locations).

- The Revenant has good critical reviews, as it currently has an 81 percent Tomatometer on Rotten Tomatoes. The film is also an awards season player, especially when it comes to DiCaprio's performance.

- As mentioned, in the direct comparison with last weekend's performance of The Hateful Eight, The Revenant will have the added advantages of a larger location count and not having its weekend performance deflated by a Wednesday expansion.

- As was the case with The Hateful Eight, it's possible that the excitement for The Revenant in larger cities won't spread throughout the rest of North America given the same "art house" feel of the film.

- Even with the softer than expected expansion of The Hateful Eight, that film will still provide a bit of very direct competition to The Revenant this weekend.

- As mentioned, January is typically a strong period to launch horror films. Early January openings for horror films in recent years have included $15.0 million for last year's The Woman in Black 2, $18.3 million for 2014's Paranormal Activity: The Marked Ones and $21.7 million for 2013's Texas Chainsaw 3D.

- Natalie Dormer's presence in the film could help the film appeal to the Game of Thrones fanbase a bit.

- The film's PG-13 rating will make the film more accessible to teens.

- The Forest is performing quite softly for a PG-13 horror film on Twitter, though the film's generic title could be deflating online activity levels a bit.

- Opening so soon after Universal's successful Krampus and only two weeks before STX Entertainment's The Boy will likely limit potential demand for The Forest.

- In all likelihood the film will be especially front-loaded towards opening weekend.

Thanks to the continued strength of Star Wars: The Force Awakens and the expected strength of The Revenant, we look to be in store for another strong weekend overall. BoxOffice projects this weekend's top ten films will total $149.9 million. That would represent an impressive 43.2 percent increase over the $104.7 million top ten total of the same weekend last year, which was led by the $39.2 million launch of Fox's Taken 3 and also saw Paramount's Selma take second place with $11.3 million.