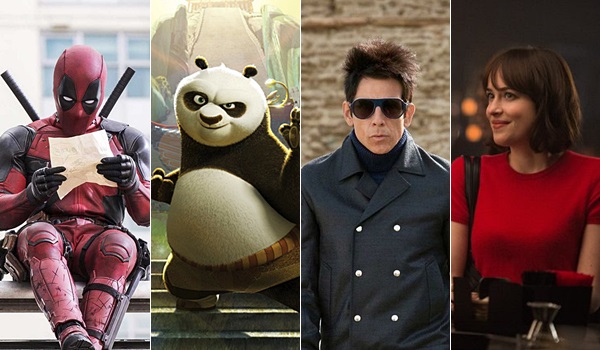 Fox's Deadpool arrives in theatres this holiday weekend riding on an enormous wave of strong online buzz. Anticipation for the antihero comic book adaptation starring Ryan Reynolds has been building up for months thanks in part to the continued strength of the film's marketing campaign. Online activity levels for Deadpool have been so massive that Deadpool has generated more tweets in the days leading up to its release than any single film in 2015 did, with the lone exception of Star Wars: The Force Awakens. BoxOffice remains bullish on Deadpool and feels that the film will open in the same neighborhood as the $93.0 million four-day Presidents Day weekend launch of last year's Fifty Shades of Grey.

- As mentioned, the Twitter activity levels for Deadpool in the days leading up to its release have only trailed those of Star Wars: The Force Awakens when it comes to 2015 and 2016 releases.

- Deadpool has been generating strong online pre-sales over the past few weeks. Fandango reports that the film is outpacing last year's Ant-Man in pre-sales, which opened with $57.2 million and grossed $63.6 million in its first four days.

- Initial critical reviews for the film are good, as Deadpool currently boasts an 82 percent Tomatometer on Rotten Tomatoes.

- Deadpool has been one of Marvel's more popular characters for quite some time now, especially within the X-Men universe. Given Deadpool's popularity, an opening weekend performance in the same neighborhood as the $85.1 million start of 2009's X-Men Origins: Wolverine feels reasonable.

- Given the film's tremendous online activity and strong pre-sales, it appears as though Deadpool is branching out a bit beyond the core X-Men fanbase. As part of that, the film should also receive an added boost from Valentine's Day falling on Sunday.

- In comparison to other high-profile comic book films, Deadpool will have the disadvantages of an R rating, the lack of higher priced 3D admissions (though the film is playing in IMAX) and a location count in the neighborhood of 3,500 locations as opposed to 4,000 locations. While these factors won't prevent a strong opening, they could still limit the film's break-out potential a bit.

- With online activity levels of this scale and Deadpool's strong online popularity to begin with, it's still possible that overall anticipation for the film isn't quite as high as the film's online signs suggest.

- While the original Zoolander wasn't a blockbuster back in 2001 (the film opened with $15.5 million and finished its domestic run with $45.2 million), the film has developed a larger cult following over the years.

- Twitter activity levels for Zoolander 2 have been strong, but they aren't out of this world either, especially for a sequel with a cult following.

- The film's PG-13 rating could lead to Zoolander 2 getting a bit of a boost from younger moviegoers who can't get into the R-rated Deadpool.

- Potential for Zoolander 2 appears to have been limited by the decision to open the film against Deadpool.

- As was the case with 2013's Anchorman 2 and 2014's Dumb and Dumber To, having established a larger cult following over the years doesn't always transfer into a significantly stronger performance for a long awaited comedy sequel (especially when it comes to admissions).

- Early reviews for Zoolander 2 are trending negative, as the film currently has a Tomatometer of just 37 percent on Rotten Tomatoes.

How to Be Single

- How to Be Single should receive a sizable opening weekend boost from Valentine's Day falling on Sunday.

- With Lionsgate's The Choice and Sony's Pride and Prejudice and Zombies both disappointing last weekend, How to Be Single will have even more space in the marketplace among its target audience.

- While Twitter activity for the film has finally started to pick up over the past few weeks, in general the film's online activity levels have been lackluster, especially given the size of Dakota Johnson's online following after Fifty Shades of Grey.

- Opening a film targeted at female moviegoers over Valentine's Day doesn't guarantee a break-out performance. With that in mind, How to Be Single could be headed for a mid-level four-day start similar to 2012's This Means War ($20.0 million) and 2009's Confessions of a Shopaholic ($17.8 million).

- How to Be Single will face tough competition from both Deadpool and Zoolander 2 when it comes to date night audiences this weekend.

BoxOffice projects this weekend's top ten films will total $191.0 million over the four-day holiday frame. That would represent a 15.5 percent decline from the $226.1 million four-day top ten total of Presidents Day weekend last year. The four-day holiday frame last year was led by the mentioned record-breaking $93.0 million debut of Universal's Fifty Shades of Grey, saw the $41.8 million break-out start of Fox's Kingsman: The Secret Service and the $40.0 million second weekend take of Paramount's The SpongeBob Movie: Sponge Out of Water.

Check out our complete four-day forecast in the table below.