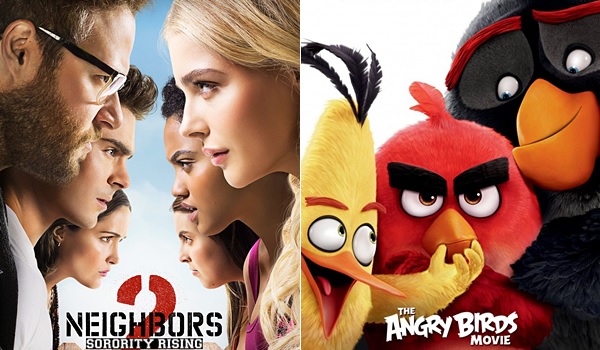 Universal's Neighbors 2: Sorority Rising and Sony's The Angry Birds Movie will battle it out at the box office on May 20. At this point BoxOffice feels that Neighbors 2 has the opening weekend advantage between the two films, but The Angry Birds Movie should display stronger holding power after opening weekend. Also opening on May 20 is Warner's The Nice Guys, while Disney's Captain America: Civil War should still be going strong in its third weekend.  The combination of the four films should lead to a healthy overall frame that weekend.

- Like Neighbors before it, being the first comedy of the summer movie season is likely to help Neighbors 2 as well.

- Comedy sequels are never a sure thing at the box office. Recent comedy sequels that failed to duplicate the success of their predecessors include last year's Ted 2 and 2014's Horrible Bosses 2.

- Seth Rogen and Zac Efron both saw their respective comedy follow-ups to Neighbors underperform, as Rogen's The Night Before totaled $43.0 million in its domestic run, while Efron's Dirty Grandpa grossed $35.6 million.

- Early Twitter activity for Neighbors 2 has been relatively modest.

- Angry Birds has been an especially popular video game franchise throughout the current decade. That popularity is likely to transfer into a successful box office performance for the film.

- Sony has had recent animated success with both the Hotel Transylvania and Cloudy with a Chance of Meatballs franchises.

- The Angry Birds Movie is the only fully animated film scheduled to be released this May. That should help the film appeal further to families, especially those with younger children.

- While it won't face much direct competition at the time of its release, being slotted in between Disney's Zootopia and Finding Dory could still limit the potential of The Angry Birds Movie, especially given the how exceptionally well Zootopia has been received by moviegoers.

- Early Twitter activity for The Angry Birds Movie has been soft by animated film standards, especially since the property's established following should help boost online activity.

- Stars Russell Crowe and Ryan Gosling and director Shane Black should give The Nice Guys enough appeal to serve as counter-programming to May's higher profile releases.

- Early Twitter activity for The Nice Guys has been very solid.

- The amount of high-profile films opening this May will make it tough for The Nice Guys to break out, even if it is well received. Opening the same weekend as Neighbors 2 won't help matters either.

- The film's 1970s setting and dark comedy elements could prevent The Nice Guys from finding a wider audience.

- Russell Crowe tends to be hit or miss at the box office.